It was Florence Griffith Joyner (U.S. track and field Olympian) who said, “When anyone tells me I can’t do anything, I’m just not listening anymore.” These are the same words that echo in the mind of athlete, author, and fitness influencer, Santia Deck, as she leaves her opponents, both male and female, in the dust. She jukes them with Barry Sanders-like finesse during flag football and rugby games. As she runs past her opponents on the field and gives it her all during workouts, her vision is set on her biggest goal: the Olympics. Taji Mag was able to chat with Santia to discuss health, self-love, and her journey to Japan 2020.

Self-Love is How You Treat Yourself 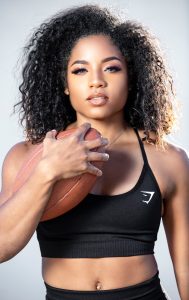 Dapper Dr. Feel (DDF): How important is fitness to self-love?

Santia Deck (SA): I would put the two in the same category because how you treat yourself correlates to how you value yourself. If you are someone that doesn’t care about working out, eating healthy, and making sure that you are putting the proper nutrition in your body, it shows that there are some deep rooted issues within yourself. I personally think taking time for health and nutrition, is taking time out for self-care.

DDF: You are in great shape, what made you choose to be a vegan and what changes did you experience once you made the change?

SD:  Well, I was vegan about nine months ago and I just recently decided to go back. My life changed physically, emotionally, and mentally. My skin cleared up, my energy level skyrocketed (I felt like I was a kid again with unlimited energy), I slept better, I had a healthy bladder and intestines, and I felt like I was in tip-top shape. I was competing on a higher level than some of the pro athletes I was training with.

I would eat avocados and mangoes for breakfast before training, then after the workout, I would still feel pretty good but the NFL athletes would be on the ground dying. I realized then that what you put in your body does matter. People think that you have to have all this meat and carbs to gain muscle mass but there are a lot of vegan athletes who are doing well in their respective sports. 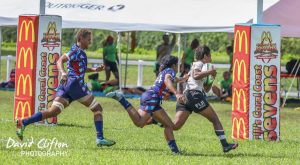 Santia in action on the field.

DDF: What are men’s reactions when they see you on the field and/or guard you?

SA: I usually get questions like “Who are you?” “What are you?” “What kind of girl are you?” and “Why are you like this?” Of course, you have those people that are mad and/or those guys that claim they weren’t giving 100%. I get a lot of different reactions.

It’s funny, people think just because I am a girl that I am not supposed to be super athletic and compete on the same level as a man. Of course, I am not saying that I can go on the football field and be one of the guys, but I do think that my footwork and moves are pretty good for any athlete. 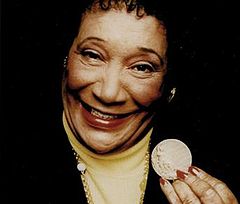 “I always believed that I could do whatever I set my mind to do.” – Alice Coachman

DDF: Who taught you about sports and how did they encourage you?

SA: Definitely, my older brother because I grew up with boys. I have three brothers and one sister, one of my brothers is actually my twin. So when I was younger I was always competing with my twin and my older brother would make us compete in various activities. He created that competitive spirit and the reason I am able to do the things I can do now athletically. I was doing footwork drills and running routes when I was five years old. I was never the girl that played with dolls, I was always outside doing something athletic. I was a tomboy doing everything my brothers were doing.

DDF: What made you practice celibacy?

SA: I was in an abusive relationship and had stayed in the relationship longer than I needed to. I think it’s because I had sex with this person, which created an attachment, and I am very spiritual, so I believe in soul ties. I felt like I had a major soul tie with this person that was created through sexual intimacy.

Then there was a point when I thought that I wasn’t going to be here anymore because of the abuse and I remember praying to God that if He were to get me out of this situation, then I would make a promise to be celibate. Never have sex with someone that doesn’t deserve me. After God got me through that situation, that is when I decided to commit to being celibate.

There are a lot of spiritual demons when you have sex with people and I felt that was something going on with me. Honestly, I just want to have a blessed marriage, I want my children to grow up in a two-parent home, and just do what I feel is the right way.

DDF: Are there some difficulties being celibate?

SA: It’s been tough while I’ve been dating. I have only had one person that respected me enough not to explore dating with me because of my decision, but a lot of men have tried to act like they can hold out and eventually try their hand anyway.

It is tough trying to find someone when you decide to be celibate but I have avoided so much drama and people I didn’t need to date because they are scratched off my list once I tell them about my decision.

DDF: Have your followers given you a lot of praise for being such an inspiration?

SA: I get a lot of messages about how I have influenced people to workout, chase their dreams.

DF: How do you feel about all the support that you get from your followers?

SA: I am grateful and thankful to have a platform to give people daily motivation. To be an inspiration to the kids that they can do whatever they want to do. Reminding them that there is no limit except the limit you put on yourself. I’m just grateful to God.

DDF: How do you react to some of the negative people and comments?

SA: I have thick skin and people are going to feel the way they feel and have negative things to say. To me, it’s just ignorance and I don’t care because I love myself the way that I am. I look the way I look because that is the way I am supposed to be… a professional athlete. It’s like the thing that Serena Williams goes through, you can talk about her but she’s a millionaire. 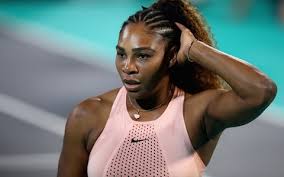 “Think of all the girls who could become top athletes but quit sports because they’re afraid of having too many defined muscles and being made fun of or called unattractive.” – Serena Williams

DDF: What is your biggest goal right now?

SA: My biggest goal right now is the Olympics because it’s right around the corner. Of course, I want to have success in all aspects of my life but the biggest goal is definitely the Olympics, Japan 2020. 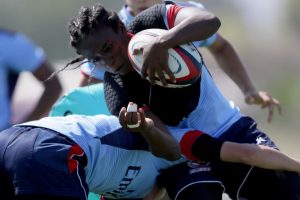 DDF: What are your next steps to get there?

SA: It’s a process to make it to the Olympics. I just need to be seen by a USA coach and that is accomplished by going to camps, games, etc. I’ve been doing those things now and just waiting to get a tryout but I will keep grinding until I do.

As many of us watch Santia make countless plays on the field via social media, we may see her alongside current players for the women’s USA rugby team like Victoria Folay. Better yet, we see her being like her biggest Olympic inspiration, Flo Jo, and standing with a gold medal around her neck, mismatched socks and all. Follow Santia on Instagram. 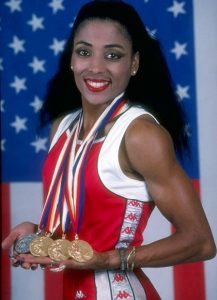 All photos of Santia are taken by Enka Lawson and Jeffery Mustache.