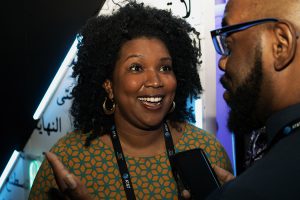 Love is hard to find in this world, so image finding a bond with someone so deeply that you can’t stand being away from them. Now imagine having to hide that relationship, restricted from fully exploring it in fear that you will be disowned, harmed physically, or killed. So you escape with your partner, leaving behind family friends and a life within a community, to have emotional and relationship freedom. That is the case for the two women in the virtual reality (VR) immersive, Another Dream, by Tamara Shogaolu.

Another Dream started out as a collection of interviews that were collected by Tamara and journalist Nada ElKouny over two years in Egypt. They interviewed many women, ethnic minorities, and people of the LGBTQ community about their experiences.

These stories needed to be heard because their relationships, in the eyes of some people in Egypt, are seen as immoral; having the livelihood and lives of people in the LGBTQ community threaten due to aggressive homophobia.

“After the Revolution, people became very open and started to reimagine what Egypt could be. What stood out to me about the experience was a lot of the queer voices and stories had optimism that things were going to change,” Tamara Shogaolu explained about her interviews. 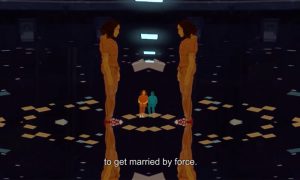 Tamara mentions that the word refugee is misinterpreted, elaborating, “The word refugee has been highly politicized. If you really think about it, it’s someone that is forced from their home and I think people forget that. It means we don’t want you here and there are people that have whole lives, like the characters in our story. One is an engineer and the other is a medical professional. They have to leave that and start from scratch. They are doing well, back in school re-studying the occupation that they were doing, in another language, while only being there for two years. That’s amazing.”

FYI: There are some cases where authorities in Egypt have stepped in opposition to the LGBTQ community. In this case, eight men were jailed after their gay wedding video went viral showing two men kissing.

The Another Dream VR Experience 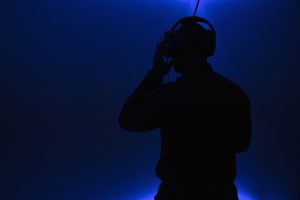 Another Dream is a virtual reality immersive that pulls you into a world where two lesbian lovers have their relationship and love tested through many challenges. Two lovers are first introduced to you with their dog while sitting on a couch. As their story begins, the environment changes to match the narration of the two. The colors and visuals evoked emotions that allowed us to sympathize more with the couple telling the story.

The experience is very interactive, having intermissions where I had to use a laser pointer (almost a like a lightsaber from Star Wars, so I was geeked!) to trace positive Arabic words. Upon completion, I moved on to the next part of the story. 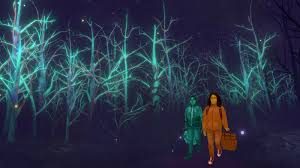 The most beautiful scene was that of the city; it’s a mix of colorful hues and sounds of the environment that are highlighted by the dark of night. I found myself floating as if I were on a magic carpet ride from Aladdin when exploring the area. It’s definitely amazing work by the VR and sound team.

During the journey, I got to a part of the story where the two lovers escape to Europe overnight because their love for each other is not accepted and one of them was set to wed in an arranged marriage. At this point, I felt the cold and dark of night, the fear of being captured by those in search of the two or just any random stranger that could harm the women on their search for refuge.

When the characters arrive in Europe, you feel the eyes of judgment and unfamiliarity of them being women of color as characters shop at the local grocery.

Eventually, they become comfortable in the fact that the only thing that matters is their love for one another. By the end of the experience, I felt happy for the two coming to the revelation that they were safe and although they are starting their lives together, they can do it happily together.

FYI: Another Dream is part of an animated transmedia series, Queer in a Time of Forced Migration. The first part of the series began with the first short Half A Life. 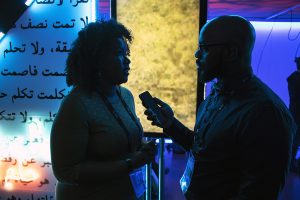 Tamara Shogaolu is a talented director/creator/artist from a multifaceted cultural background. While studying economics at Occidental College in Los Angeles, CA, she was convinced by a professor to study film after creatively using it in her economics research projects.

From there she earned her MFA from the University of Southern California’s School of Cinematic Arts and her previous work, Half-Life, is a short film that has garnered many awards. Not only has her work has been featured all over the world in galleries and festivals, but she also is the creative director for Ado Ato Pictures.

Seeing Through It All

I didn’t know what to expect when I first put on the VR gear but I am glad I went to the experience with an open mind and with no expectation. This experience is a learning tool that may help others understand that love shouldn’t only be celebrated and hindered.

With the work that Tamara and her crew have put into this project, I am happy to say they have achieved the goal of both creativeness, experience, and informing the audience. Hopefully, Another Dream will touch enough people that it will allow people to safely and openly love whomever they want without any hindrance.

There is a reason that the online dating industry makes over $3B each year since 2010 according to IBISWorld.com. Most of the population is looking to find a partner to share our lives with. Along with that comes the difficulty of learning people and what we can deal with. One of the biggest hurdles to overcome in a relationship is the mental aspect of love and, in some cases, it’s difficult and, sometimes, scary. This is why oftentimes we ask ourselves “Are you good for my mental health?” whenever we find a possible suitor we deem attractive. Taji Mag interviewed author and self-love/relationship advocate Derrick Jaxn about his thoughts on love, dating, and mental health.

Taji Mag: There is a quote circulating on social media that says “You are attractive, but are you good for my mental health.” What does that mean to you?

Derrick Jaxn: I think it is adult and a mature way to look at it. While dating we focus so much on instant gratification that we forget what happens on the back end and we end up paying for it in the end in a lot of instances. A lot of people need to take that approach. It’s kinda like when you get food, it may look good, it may smell good,  but what is the nutritional makeup.

Taji Mag: In terms of maturity level, is there any noticeable development in judgment while dating that you have noticed with yourself?

Derrick Jaxn: It’s kind of like the bible verse (1 Corinthians 13:11) When I was a child, I talked like a child, I thought like a child, I reasoned like a child. When I became a man, I put the ways of childhood behind me. In our youth, we are products of our environment but when you grow up, you no longer have that excuse and so now, as an older version of yourself, you are a product of your experiences. Now I have experienced women on a different level, more than what they can do for me sexually or whatever way I can use them. I know that’s a dark description of how we can objectify women, but we have to grow to see them as more valuable because society does not condition us that way.

Taji Mag: Can you give a good example of what you are talking about?

Derrick Jaxn: If you have a mom and dad that are both good influences, the media will inundate with images of women that are strictly for our consumption in the perspective of a man. On the other side of that attractive woman is a heart and a lot of trauma comes when you break that heart. It creates damage when you manipulate the mind and I have grown to know that especially now that I speak on behalf of relationships. A lot of times, it is women who are asking me to speak on their situations and it’s a sobering reality to hear about the things we put them through so casually.

Taji Mag: Sounds like you take to heart what women say and it’s very concerning what they go through.

Derrick Jaxn: I am very passionate about what I talk about because we have to change that culture. We can’t wait until our daughter is 16 about to go on a date to pull out a shotgun to care about women. We have to do our part now and shape things into the way we want them.

Taji Mag: How can you identify when you are in a mentally unhealthy relationship?

Derrick Jaxn: I have my bouts with mental health that I don’t play with. I am married now but, while I was dating, whenever situations blurred the line of toxicity or compromised my mental health, I made sure to nip it in the bud. I can’t afford to be played with because I already have a daily struggle. If you know anyone that struggles with mental health, they don’t always feel in control of their thoughts, moods, or emotions. You don’t need another opponent when you have that daily challenge. For me, I have never been in an unhealthy relationship, if there were situations where I felt whomever I was dating was playing with me or my emotions it got nipped in the bud real quick!

During the journey to find love it is important to listen to your heart and seek emotional tranquility than to fall ill to mental toxicity from another. It is easier said than done but that is the beauty of life, to learn as we go and discover what makes us happy.

“Unlike many other journeys, when it comes to finding self and matters of the heart you’ll swiftly find yourself lost if you follow someone else’s” – Rasheed Ogunlaru