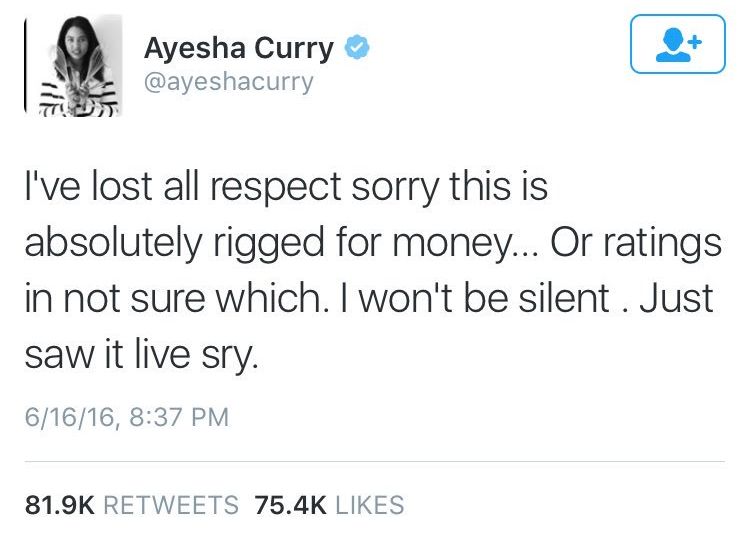 With all the unnecessary fuss over the tweet from @AyeshaCurry regarding game six of the 2016 NBA Finals and the general capitalistic nature of entertainment, I feel like we need to show this Black woman some love! In this June tweet, the famous Mrs. Curry defended her husband on social media. She has nothing to apologize for. Ayehsa’s name is legendary. And since there are already a dozen stories out there about the tweet, we’re taking this in a totally different direction. Here at @TajiMagazine, we ADORE Ayesha and we want to celebrate her with the rest of the powerful Black women out there. Here is a list of 10 of the greatest songs featuring powerful Black women from the year Ayesha Curry was born: 1989. (They also happen to describe how we feel about her royal Curry-ness).

7. Anita Baker: Giving You The Best That I Got

6. Patti Labelle: If You Don’t Know Me By Now

1. Janet Jackson: Miss You Much

Of course, we couldn’t close out this list and neglect this classic honorable mention. That’s rigght, you guessed it. Another Bad Creation: “Iesha”

So Ayesha, for the moments when the money hungry machine known as the NBA aint your type of hype or you feel like the media is criticizing every little step you take, we love you!

Waiting to Exhale: The Top 3 Things Black People Must NOT Do

Waiting to Exhale: If you want to end police brutality…

There are way too many people suggesting that we sign kumbaya with our oppressor and not enough folks offering practical solutions that will keep my son from being a target. Let’s get into the three things we must NOT do.

1. We must NOT appeal to the oppressor’s sense of morality.

Racism works to their favor. Dismantling white supremacy has no net benefit for those in power. Your Black life has no chance of keeping them in their homes and safely segregated away from us ‘thugs’. White people, even “hip” ones, will never be able to effectively empathize as a collective to a degree that will end racism. After a while, most of them get tired of hearing about race/racism. Getting the oppressor to acknowledge and confront their privilege is an uphill battle with concrete boots. I am often reminded of a quote from Dr. Cobbs and Dr. Grier from the book Black Rage: “slavery was never undone for either the slave or the slave master”. No matter how tempting, DO NOT attempt to appeal to white folk’s morality. STOP replying on white folks to save us.

2. We must NOT get caught up in a “who’s the better revolutionary” situation.

It won’t end well and nothing meaningful will get accomplished. Many Black nationalist movements are limited by their exclusively intellectual or political nature. So-called experts sit in their offices deciding policies and plans for people who they have never been with or around. Revolutionaries can be guilty of that too. The reason DC’s “Mayor for life” Marion Berry got so much love was that he was among and about the people. He did not have to prove that. It was evident. Similarly, Muhammad Ali was the people’s champ because he sacrificed a great deal with no guarantee of a decent return on investment. He approached people in a manner that did not demean, disregard, or insult them. Unfortunately, there are some folks in the movement who will dismiss your entire existence if you admit to shopping at a big brand store. The head shaking irony to this, however, is blanket condemnation and revolutionary snobbery. STOP looking down on your own people.

3. We must NOT assume that we are doing more for the movement just because you tweet, post, and show up to protests.

Remember, the Montgomery bus boycott lasted over a year and in order to be sustainable, it required the attention and participation of all Blacks. Commitment to real action is key. I know single parents who not only show up to demonstrate, but also make good for protesters and bring blankets and give more than they have physically, spiritually, and financially to end the assault of Black people. It is about more than photo ops. STOP your t-shirt revolutionary brigade. We are more powerful than we realize. In little pockets all over this stolen country, there are high concentrations of Black businesses with strong products and services. There are predominantly non-white neighborhoods where the dollar circulates multiple times. These businesses create jobs, teach people about political/economic power, and strengthen our communities. It is imperative that we learn about and support them (us). Think of how much you spend each week and where those dollars go. Write or type a list of where you spend your money. How many of those places are Black-owned or give something back to the community? For at least one week in the new year, try shopping with Black owned businesses for at least half of your purchases. It is easier than you may think.

But wait, this article is supposed to be about ending police brutality. How is capitalism going to solve that issue? If we can sustain our own communities economically, politically, and every other way, then we will not need their police to ‘protect and serve’. Instead, we can prevent these murders by developing our own financial strongholds. Economic freedom is a big part of being free from police brutality. The police are not killing white soccer moms en masse. This is a critical time where we can truly rise up and make solid demands. In my hometown, they shut down the mall and multiple intersections. We can demand small business grants, tax breaks, land ownership, secession, resources, or whatever else we collectively decide. I am tired of worrying about whether my son will survive his Blackness. I am ready to build with anyone who is serious about stopping these murderers.

Jidenna: Classic Man. This song is extra swanky! Get into it and the amazing video, then head to one of the links below to purchase it. #SupportBlackArtists

Tish Hyman : Subway Art… This song is pure genius…. Take 3 minutes and 43 seconds to listen, then go to links below and purchase it. #SupportBlackArtists