If Black Girl Magic was a person, Santia Deck would definitely be one of the women to use as the face of BGM. With her career goals redirected from Olympic hopeful to the highest-paid female football player, she is the embodiment of “When one door closes, another one will open.” I am pretty sure her football deal is a door she’s glad to have opened. In honor of women’s month, Taji Mag decided to catch up with the busy star athlete to get an update on her new success.

Dapper Dr Feel (DDF): What were your thoughts when you signed that huge football deal?

Santia Deck (SD): I knew I would be a pioneer for women’s football. I am just more excited that I can be an influence to little girls who want to play sports and give those girls something to strive for.

It’s still a lot for me to take in, but as for not making the Olympic team and instead being given this huge opportunity, it really showed me the power of God. I am a very spiritual person and I was taught that God is doing great things for you, even when it doesn’t seem like it. To see this manifest was validation and testimony that he can do great things in your life.

DDF: What position are you looking to play? Any chance you become the Lamar Jackson of the league? Would you train with Lamar Jackson? 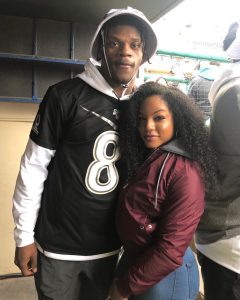 SD: I can throw, but I don’t have an arm like Lamar Jackson. My position by nature is Running Back, so I won’t be playing Quarterback. I would love to train with Lamar Jackson, who wouldn’t? He could probably teach me a few things. He’s an amazing athlete.

DDF: What has been one of your newest challenges since your new success?

SD: I think it’s the same problem everyone has when they elevate in their career. Not knowing people’s intentions…random people saying “hey, I’m your family” or “I know you from back in elementary school”. These people don’t have good intentions and they can be crazy. Luckily I have a good team around me. My mom is my manager and she really looks out for me.

SA: I would say “New Beginnings” are the two words I would choose to describe my 2019. 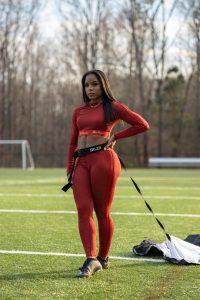 DDF: In the Santia Deck biopic, who would you select to play you in the film? What actor would play your love interest in the film?

SA: That’s a good question. I would want Tianna Taylor to play me in a biopic because we have the same hair and body type. She has good abs, like me. As for my love interest, I would want Micheal B. Jordan to take on that role. He’s such a beautiful man.

DDF: How was it being on Kelly Clarkson?

SA: It was great! She made me feel really comfortable. I think it’s because we are both from Texas so that familiarity made the interview easy.  She is a very nice person.

SA: To have an amazing exhibition and show my talent this year. I would also like to take my brand to the next level, solidify generational wealth for my future kids, and travel to as many countries as I can this year.

Many young women everywhere now have another example of chasing the dream and getting positive results. From the field to television, Santia is working hard to become one premiere athlete and who knows, one day she may be mentioned in the same breath as Serena Williams. You can follow Santia on Instagram for upcoming events.

Santia Deck will play for the LA Flames in the Women’s Football League Association. The season starts 2021. Will you be watching?