Following two sold-out runs at the National Theatre in London, a successful run at London’s Roundhouse, and a world tour, Nigerian-born playwright Inua Ellams’ acclaimed Barber Shop Chronicles makes its New York and BAM debut December 3—8. The sold-out sensation explores the diversity of Black male identity via the intimate community of the barbershop, where men across the African diaspora have gathered for generations to discuss the world and their lives. Filled with passion, humor, and honesty, the celebrated work is inspired by Ellams’ own experiences as an immigrant.

Directed by Bijan Sheibani, Barber Shop Chronicles follows the conversations and concerns of a group of African men as they interact in six different barbershops in London, Lagos, Johannesburg, Accra, Kampala, and Harare. The all-male, 12-person cast riffs on topics both personal and political—from sports to race relations to views about fatherhood, identity, immigration, and masculinity. Music and dance knit together the individual episodes in this fast-paced production. A mastery of humor, pace, and wit, the story takes place over a single day as characters, jokes, and plotlines traverse continents and cultures. 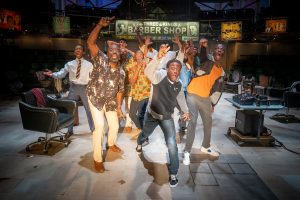 Barber Shop Chronicles is presented in its New York premiere at Next Wave 2019—the first season under Artistic Director David Binder, in which all artists are making BAM debuts. The season runs through December 2019 and includes theater, dance, music, film, site-specific, and multi-genre work across BAM’s venues and off-site, as well as Holiday programming.

About the Artists
Born in Nigeria in 1984, Inua Ellams is an internationally touring poet, playwright, performer, graphic artist, and designer. He is an ambassador for the Ministry of Stories and has published four books of poetry: Candy Coated Unicorns and Converse All Stars, Thirteen Fairy Negro Tales, The Wire-Headed Heathen, and #Afterhours. His first play, The 14th Tale, was awarded a Fringe First at the Edinburgh International Theatre Festival and his fourth, Barber Shop Chronicles, sold out its run at England’s National Theatre. He is currently touring An Evening with an Immigrant and recently premiered The Half God of Rainfall, a new play in verse at Birmingham Repertory Theatre and Kiln Theatre, London. In graphic art and design, online, and in print, he tries to mix the old with the new, juxtaposing texture and pigment with flat shades of color and vector images. Ellams lives and works from London, where he founded the Midnight Run, a nocturnal urban excursion. He is a Fellow of the Royal Society of Literature.

Bijan Sheibani was artistic director of the Actors Touring Company (2007—10) and associate director of the National Theatre (2010–15), where he directed A Taste of Honey, Emil and the Detectives, Romeo and Juliet, Damned by Despair, The Kitchen, War Horse (US tour), Greenland, and Our Class. His other theater credits include Dance Nation (Almeida); Circle Mirror Transformation (Home, Manchester); The Brothers Size and Eurydice (Young Vic/Actors Touring Company); Barber Shop Chronicles (National Theatre/Fuel/West Yorkshire Playhouse); and Romeo and Juliet (National Theatre). Opera credits include Nothing (Glyndebourne) and Tell Me the Truth About Love (Streetwise Opera).