Morgan Cooper made a huge impression with his trending Fresh Prince of Bel-Air inspired short, Bel-Air, and the filmmaker continues his success. The award-winning filmmaker snagged two awards in the 2020 Tribeca X category of the Tribeca Film Festival. Morgan Cooper won “Best Feature Film” for U Shoot Videos? and “Best Short” for Pay Day, winning in the two out of the three categories of the Tribeca X category. Taji Mag was able to catch up with the multi-award-winning filmmaker to see how his projects came to life.

Dapper Dr. Feel (DDF): What moment did you decide you want to make films?

Morgan Cooper (MC): My career started on my 18th birthday. I bought a Cannon P2I DSLR camera at Best Buy and, with that camera, I made a career. I felt like I had something to say through the medium. From that moment on, I just showed up and did the work every day. I took small steps to improve my skillset. Over the years I was able to find my voice. 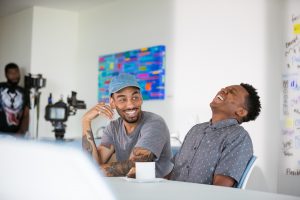 U Shoot Videos is a powerful narrative following a filmmaker trying to excel in his career field. Being young, Black, and gifted but denied the opportunity to make commercials due to his lack of experience and no film school, Moji must figure out how to keep his dream alive and hurdle the obstacles in his path.

DDF: U Shoot Videos? provides a narrative some Black creatives can relate to. What has been the most interesting response to your film?

MC: Some of the people that reached out felt it was their story. They felt seen and heard through the film. I can’t think of any better feedback than that. There were people that were thinking about giving up, feeling so alone during their journey in filmmaking, and, after seeing this film, it gives them an extra boost. I was overwhelmed with how positive and how beautiful the feedback was.

DDF: There was a lot of support for the lead character Moji, from characters like Aaron and Moji’s brother. Was that intentional during the course of the film?

MC: The show of support was very important to me. You don’t see Black men supporting each other enough on screen. Everything in the film is based on real reactions that I had during the course of my career. I felt it was my responsibility to show these really honest moments where Black men support each other without any alternative motives. Like Aaron telling Moji “I’m down to help you because I want to learn. I have an interest in what you do and you inspire me.” I am really proud of that moment and I hope to see more support among Black males like that on film in the future. 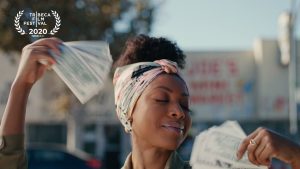 PayDay is a collaborative project with Color Creative, Synchrony, Gian Spoon agency, and written by actress/comedian Gabrielle Dennis. The short follows Nyssa, a young woman who desires to open her own business but spends money like there is no tomorrow. On her payday, she gets caught in a time loop “Groundhog Day” style and is unable to break it until figures out a way to make better decisions.

DDF: How did you become apart of the PayDay Project and how was it working with Gabrielle Dennis?

MC: Denise from Color Creative reached out to my agent about the PayDay project. It just looked like an interesting and fun piece. I pitched on it and got the job. I locked arms with Color Creative, Giant Spoon, and Synchrony to make the film happen. It was a long two-day shoot but it turned out really nice in the end.

Gabrielle was great to work with. She brought a lot of enthusiasm to the table. She has a brilliant comedic mind. It was very fun being on set and creating space for her, letting her talent really shine. She trusted my vision from the start and throughout the shoot. We gave ourselves space to express the ideas that we both wanted to bring to the project. We were both aligned with the why behind the project and it was just a tremendous project from start to finish.

DDF: How did you become so good at providing the right light for people of color while you shoot?

MC: Perfecting that craft started from who I am, understand my background and culture. As a Black man, I wanted to make sure people of color are captured on film with care. That’s really the root of it. From there it filters into lighting, lens selection, and crafting the scene. Understanding how Black people have been captured on film historically, which hasn’t been great. Over the years I have tested, researched, and studied different techniques to maximize the quality in which our skin is captured. I often think about the actors who are overlooked especially from the city where I am from – Kansas City. With the opportunity for the actors to be on set, they can’t be wondering how they look, they have to just trust your direction. As a director, it’s something I take seriously. I like to make sure I capture actors in an honest way.

DDF: Have you had other filmmakers ask you about lighting while filming actors of color? 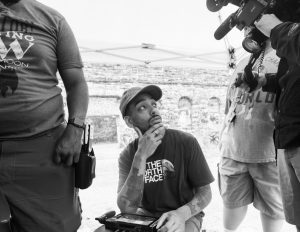 MC: I have had other colleagues that have sought out advice on lighting, different fusion techniques, transitions, lenses, etc.

DDF: What director inspires you?

DDF: How does it feel to win Best Short and Best Feature in the Tribeca X?

MC: It feels amazing! I feel very humbled and I am full of gratitude, to be recognized by such a prestigious institution. More than anything, I am so happy for all of my collaborators and I am so thankful to the team for putting together these projects. I can not say enough about the honor.

DDF: What would be your dream project?

MC: I have several dream projects. I can’t really discuss them but I am very excited about the dream projects I will get to bring to life over the next several years. So stay tuned.

DDF: What actor/actress would you like to work with?

MC: I definitely want to work with Mahersla Ali and Janelle Monae. I think they are great actors. When you watch them, you are really transported into the moment they are expressing. I think we would be able to create something special together.

We hope to see more amazing films from the talented filmmaker. Hopefully, one of his dream projects will feature Mahersala Ali and Janelle Monae and will be one that is celebrated as a cult classic. Keep up with Morgan Cooper on Instagram at @cooperfilms.