There were over 50 films shown that had me laughing, crying (I call it eye sweat, lol), and, most of all, sympathizing with some of the characters on screen that look that like me.

“People of color have a constant frustration of not being represented, or being misrepresented, and these images go around the world.” – Spike Lee

Below are some films that I loved.

We Want to Make It A film that explores the journey of young musicians (Jourdan, 14yrs old, and Tarron) as they strive to make their way from performing on the DC metro to stardom. It’s a very well done piece that shines light on Black youth doing something positive with their talents instead of becoming a statistic out on the streets. 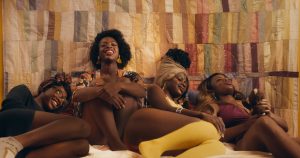 Me Time A hilarious short, done by Iyabo Boyd, that had me laughing the whole time. This film goes into the thoughts of a young Black woman (portrayed by Adnike Thomas) who just wants to find her own peace of mind while reaching her happy place and maybe an orgasm along the way. This film has a Nutty Professor feel as the very talented actress takes on all the various roles in the film. I went from chuckling in my seat to choking on my water with laughter.

Slave Cry A film, by Jai Johnson, speaks volumes on the issue of token characters that Black people are offered in hollywood. With films like Black Panther having much success and displaying diversity in the Black community, hollywood still has a long way to go. Slave Cry was a well written film that made me feel so bad for the lead character, played by Courtney Jamison, as she learns that no matter the level of talent, the entertainment business still needs to work on diversifying characters in their projects. Thank God we have a well selected Ariel for the Little Mermaid and thank God Jai Jackson made this film artist can relate to.

Roasted A hilarious short film that has a Ferris Bueller’s Day Off feel which follows a coffee shop employee who talks about his work day dealing with customers, making coffee, putting up with his boss, working solo and enjoying time listening to music while writing. His expression and body language change from animated to annoyance as he switches his focus from the audience to the characters in the film. 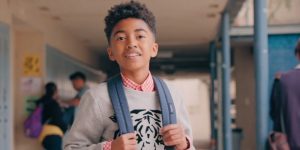 Emmett One of the standout features about a boy genius  (Miles Brown from Grown-ish) that deals with social issues, being a championed student of color, and adapting to change and maturity. This great film was both relatable and touching as it took me back to my days in my youth and adapting to life as an over achiever in academics. This film sets the tone as it really touches on some of the issues we’ve all dealt with.

LiME A story of a young man’s hardwork and success of achieving his goals threatened by bullies who attack him based on his lifestyle. Truly a touching story of how cruel people can be and how beautiful the human spirit can manifest surrounded by the right crowd. Creator/director, Donta Story, put together a great short.

East of the River East of the River, by Hannah Peterson, is a compelling story of how a young girl, her highschool mate, and former schoolmate now sex worker connect through exploring the streets of DC. I think this film had great chemistry amongst the actors. Their relationship was very ambivalent, because it felt a little romantic. Nonetheless, the young DC natives did an amazing job! 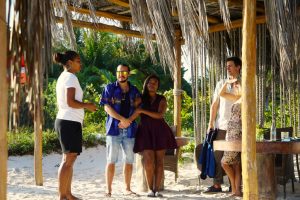 Una Great Movie Explores the world of a Black female screenwriter and her hopes of getting her film picked up. The film also follows the lead character in her film as the two worlds reflect the difficulties of having creative and unconventional Black love stories, as the character portrayed in the screenwriter’s film looks to rekindle an old love that is of Mexican descent. The creator and director, Jennifer Sharp, explained the difficulty in getting new and fresh content

The Call Angel Weaver’s work is a film that captures the moment when a girl receives the phone call from her brother locked up in the prison system. The film showcased the unsettling experience of receiving the call, with a hilarious beginning that shows that the call can come at any moment.

Corey Creator/director/actor, Steven St. Pierre, put together a touching film about a Black man that has a difficult relationship with his wife, who has a drug addiction, and is raising his daughter while shielding her from the ugly truth about her mom. By the end of the film, the audience discovers why Corey works hard to keep his emotions together and his daughter safe emotionally.

The Right Swipe A show about two female friends that start a business helping men find matches on a dating app by curating their profiles. Although I have had little experience on dating apps, I found the pilot interesting and humorous. When I asked co-creator and Maryland native, Kyra Jones, about the show, she explained, “Through our research, we found that Black women and Asian men are less likely to get different matches. Even the cast is diverse, we wanted to make sure that we brought Black love to the forefront of the show. The show discusses how complex and how difficult it is to find romantic partners.” Watch the pilot here!

Together This film was one of the moving films of the festival. The story of Black love between an older married couple as they hold true to their vows through sickness and health. The film left me and those in attendance in tears as we saw the astonishing acting of EFE (2019 DC Black Films Best Actress) and her co-star show love at its best. There is talks of this being developed into a full feature film and I can’t wait to see it.

Having the Peele Appeal Night at the table and Dog Person are films from the film festival that had a Jordan Peele feel to them. It’s no surprise that the creatives of the films are inspired by Jordan Peele.

Night at the table A horror film that had definitely gave me a chill, from start to finish, as the film introduces a normal Black family that is more than just that. The director was inspired by the film Hereditary and even coached the lead actress to channel the mother of the film Hereditary. The multi-talented creative describes her films as being consequential pain in two words.

Dog Person If you loved watching the film Us by Peele or Tusk then you have to see this short film by Justin Fairweather. It’s a little disturbing in some parts but entertaining nonetheless. With a good performance by Jordanna Hernandez, Dog Person left me wanting to see what more films from Fairweather and hopefully a feature that have audiences everywhere entertained.

Who is Kevin Sampson?

Kevin Sampson is the BrainChild behind the DC Black Film Festival. He said it all started when Think Like a Man 2 came out and he was a little upset while he watched it because it was less about Black love and more of the Kevin Hart show. He explained that “We (Black people) only get a few movies per year and this is how we wasted it and maybe sometimes we need that.”

He then wrote an open letter to creatives everywhere explaining that black creatives have to do better. Many people including some hollywood actors commented on it. This inspired him to start a kickstarter for a documentary about Black Hollywood. The Kickstarter wasn’t successful but that led Kevin to create the DC Black Film festival. A place where Black people can showcase their talent and love for Black people.

The DC Black Film Festival was an amazing event and a success in it’s third year. It is important that we have events like these to not only show people of color on screen or Black culture but the diversity within the Black community. I think the DC Black Film festival will continue to grow to inspire young creatives and encourage people to watch quality films.

Winners From the Festival:

DC Best Film “ We Want to Make It”

Best Web Series “The History of White People in America”