Richard Sherman Comments on His Locs at the ESPYs *Video* 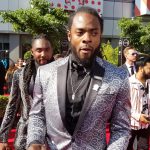