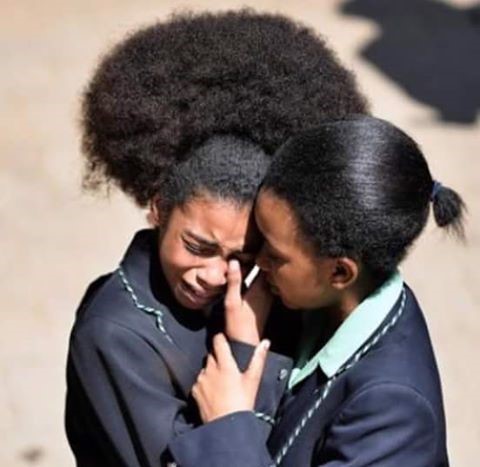 African pupils from Pretoria High School for Girls in South Africa are finally holding their school to account for racism. #StopRacismAtPretoriaGirlsHigh was trending on social media on Monday (29/08/2016). Videos and photographs of pupils protesting at the school‚ one of the pupils sporting an afro‚ went viral.

The students say that they have raised complaints about the institutional culture and racism at the school in the past, but they have been told that their focus on race and politics is the reason why there is no black student among the top 10 achievers.

After protesting over the weekend against the school’s code of conduct, which instructs them to chemically straighten their hair, the girls held their posters high on Monday while many of them defiantly kept their hair natural. When the bell rang, some of the protesters made their way back to class, but a few of the students walked behind the MEC of Pretoria. As they walked behind the MEC, they raised their fists in the air saying the “time has come” and “it’s been long enough” in reference to how long they had been fighting against racism at the school.

A student detailed how a teacher had told her to tie her dreadlocks in a way that would fit into the school’s view of tidiness. She tried to explain that her dreadlocks were too heavy and cut into different lengths so a hairband would not work. Her teacher put her in front of a mirror after class and told her to fix it. “She instructed me to fix myself as if I was broken,”

“My hair is natural and connected to my roots. They are not braids, they are roots.” A powerful image of a young girl in school uniform standing up to a man with her arms crossed above her head has gone viral. Her name is Zulaikha Patel. And the image of her defying the policing of Black bodies has become iconic. Zulaikha’s actions might have been directed at Pretoria High School for Girls, but her story resonates with many others. You see, I have already burned everything else about me in your racist space
My melanin skin
My mother tongue
My culture
My crops on land you stole

So now I refuse to burn my scalp for you
No longer will I burn within an ember of my authentic me
As I raise my fist past this mane of matted glory
You WILL accept me with my “kaffir hare”!