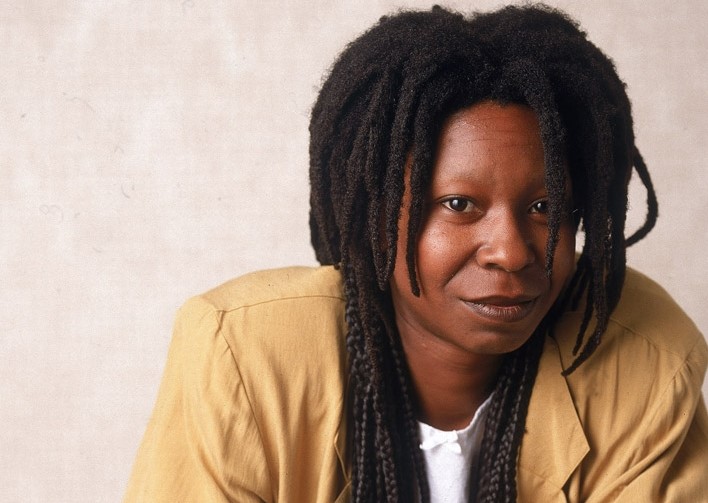 I hated Whoopi Goldberg growing up. I know that’s a messed up way to start off the birthday celebration for her. When The Color Purple came out, everyone thought I looked like her. Back then, Black gums, Black skin, and nappy Black hair were the perfect recipe for a depressing childhood. I was all kinds of African booty scratchers, skillets, and midnights. It was one of the things that made me miserable growing up. I only had two real friends during that time–my right hook and my mother. Needless to say, I fought a lot and wrote a bunch of angry poetry. Whoopi Goldberg represented (and still represents) everything I hated about myself. Between elementary and middle school I got in dozens of fights over the way I looked. My main goal was to make the pretty white girls as ugly as I felt when they teased me about being so dark. I hated looking in the mirror. My mother was a kind and candid woman who reminded me that I was not ugly everyday. She asked me if I thought she was beautiful and of course I said yes. My mother was a striking, bold woman with high cheekbones and mahogany skin that glistened. She would laugh and tell me that I looked like her, so by default I must be beautiful. It made logical sense, but when I looked in the mirror I did not see her reflection. Instead, I saw what kids at school called me–shit skin. I was faster on the track than all the children who teased me. I was consistently ranked at the top of my class academically. I won awards. I earned internships while still in middle school. I was invited to special events for gifted children. None of it made up for my skin insecurity though. It was like running a long distance sprint that never ended yet I still lost.

At some point in high school I announced to my mother that I was too dark to run in the Olympics, so I was going to be a writer and stay in the shadows. My mother was tired of the decade long pity party so she showed me a movie she promised to God I would like. (My mother refused to swear to God). Those were the be kind, rewind days so she pushed in the tape and pressed play. The Associate changed the game for me.

In the film, Whoopi Goldberg stars as a brilliant investment banker whose talent is dismissed by a white male dominated financial world. First of all, Whoopi Goldberg plays the quintessential Black woman. She has a full time job and she owns a rental property. Before this film, I didn’t know Black women owned places to rent out. It blew my mind. One of her older tenants told her as she came home one night: “It’s nice you young girls have your your careers. But when you come home to an empty apartment what do you really have?”

Without blinking an eye, her character replies: “Independence”. I was hooked.

When she tried to start her business, the bank almost denied her a loan, but she risked her home to make it happened. I came from a place where faith was too expensive. From there the movie got better and better. Instead of learning golf last minute to impress a client, she pulled in a golf celebrity to win the client over. She was the original spook who sat by the door. No one could have ever brought that character to life the way she did. She was slick, quick-witted, and dark-skinned. She had the confidence I never dreamed imaginable. Even pre-presidential Donald Trump was following behind her. She had a box of ideas she saved over the years–something i still do today with my pitches. She taught me that rejection is never the end. I won’t spoil the whole movie for you, but just know that I cried during the climax scene. She says what I think!

Whoopi Goldberg was equally phenomenal off screen too. She is an interracial relationship pioneer (as fr as I knew at the time), natural hair advocate, and human rights activist. Like me, she was raised by a single mother. She embodies resistance. Her critically acclaimed, award-winning one-woman show about Moms Mabley. Whoopi’s impact on me was parallel to Moms Mabley’s impact on her.

All those years people idolized Halle Berry we could have been praising the original sexy beast.

Before her brilliance graced the big screen, she was a stand up comedian who rivaled the likes of Eddie Murphy and Redd Foxx (for those who don’t recognize those names, that’s like saying she was up there with Kevin Hart).

Whoopi is still a force. Her guest star appearance on this terrible ABC show called 666 almost coerced me to become a fan. When her character flew away, though, so did I. She has worked with undeniable talents like Ernest Dickerson (Good Fences Director), Angela Bassett (duh), Danny Glover, and others over her career. This woman has won a Tony, Grammy, Emmy, and Academy Awards. People sleep on her resume.

In honor of all she has done and continues to do, I proudly exclaim: “I’m poor, Black, I may even be ugly…but dear God I’m here. I’m here!”