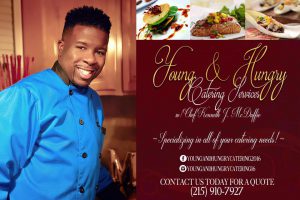 Kenneth McDuffie makes his brand known in the city where it all began… His Philadelphia. McDuffie, Philadelphia native, is an independent, motivated, and strong believer in God. With a big personality and an even larger heart, he has given his time, energy, love, and his passion for food to becoming an educator of the art of cooking. Being raised by his Great Grandmother, the late Esther A. Smith, who taught him everything that he needed to know about food, McDuffie began catering baby showers, church banquets, weddings, and later landed himself a job with a popular cruise line. He moved to Hawaii where Kenneth could share his passion for food on a greater bicoastal scale. 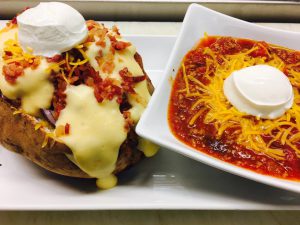 Prior to moving to Hawaii, Kenneth had already started his own catering business in 2009. He recently revamped his brand and changed the name to “Young and Hungry.” Young and Hungry has already cooked for celebrity clients such as hip hop artist Juelz Santana and Senator Vincent Hughes and his wife actress Sheryl Lee Ralph. McDuffie is a weekly guest with his own segment WCW (WE’RE COOKING WEDNESDAY) on the Big Nate & Da Big Bang Morning Show on URU Radio, he’s a guest on Moment with Purple Queen on PQ1Radio, and has also became a sponsor for the Philadelphia Democratic

‘Don’t take criticism too personal. You are a wonderful person!’ – Kenneth McDuffie

Currently working towards opening his own restaurant, McDuffie is ready to make his big dream into a larger reality. His goals are to give back to his community, educate up and coming chefs, and advise the young chefs on thriving in their positions whether it is cooking or not. With a mission to encourage the

youth to stay humble and faithful, He also embeds in their minds to grab a bite of great opportunities offered in this world until they’re full and make sure to pay their blessings forward onto others. Check his hashtags #WIKJM #YoungandHungry #ChefKenny