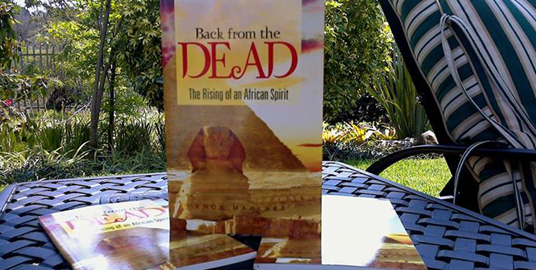 “Back from the Dead” by Knox Mahlaba

The Rising of an African Spirit is a celebration of life, it’s different seasons, and the struggle to overcome. It is an anthology consisting of fifty poems; some poems are images of personal struggles, others visualize the celebration of love, and a few are odes to great leaders and historical reflections. 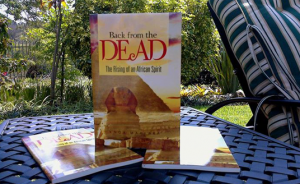 The single message this book intends to transfer to the reader is that a sense of self-love and appreciation does a world of good. Throughout the book, references are made to Africa with the sole intention of encouraging people, Africans on the continent, and across the Diaspora, to reflect on their rich identity, take responsibility for their self-concept, and to be proud of their heritage in order to inject a greater sense of self-worth and responsibility in their daily lives.

His poetry appears in the Kampala poetry anthology, which we’re launching during the Babishai Poetry Festival, August 26th to 28th at The Uganda Museum. Knox Mahlaba was born in Johannesburg, a proud Sowetan who has had the opportunity to live in different countries as a result of circumstance beyond his control and a desire to obtain an education. A copywriter by trade, he has worked for a multinational advertising company and with international brands. When writing wasn’t paying the bills, he supplemented his income with business initiatives and speaking engagements.

Moving from South Africa to Swaziland after the 1976 Soweto Riots and growing up in exile, he studied at a South African university and then overseas. Studying in America was an eye opener and afforded him the opportunity to interact with Africans from different countries. He had many Ugandan friends in the States and even visited the Ugandan embassy there. Writing about Kampala was like a home coming because as a child Uganda was in the news for the wrong reasons. Fortunately, his friends exposed him to another side of the story.

He has one published collection, Back From The Dead: The Rising of an African Spirit, available via Amazon and various online bookstores. He is currently working on his next book and intends on setting up a program to encourage writing and reading among the youth. As a Pan Africanist, his passion is sowing unity among Africans on the continent and abroad.

Writing is a release and something that comes naturally. Writing was a hobby that became a copywriting job and ultimately he began writing for a greater purpose. Mahlaba writes poetry to highlight the numerous conundrums that life offers. He prefers to relay life’s questions to readers to provoke possible answers. He also writes because he thinks African people should take the lead in defining the African experience and shaping young minds toward positive behavior.

“Soweto is a big place, where people are known by their nicknames, names related to their specialty. You really have to stand out to be recognized. It’s a place that thrives on confidence and big dreams. 1976 Student Uprisings define Soweto, the people are resilient and forever seek creative ways to achieve the best results and be the best.”

He has always been fascinated by words. “As a kid I disliked reading fiction because the characters and the plot undermined the aspirations of black people by misrepresenting them; I started reading newspapers from the age of five. It was only after reading ‘I Write What I Like’ by Steve Biko and the African Writer’s Series that I realized that there was only one way to alter the literature landscape, writing and detailing the black experience from a sympathetic perspective without being patronizing.”

Being the cultural melting pot of Johannesburg, its multicultural environment encourages multilingualism and develops interest in other culture, breeding acceptance. Soweto teaches you to be universal by removing ethnocentrism {tribalism} from the mind-set.

“I write about everything, everything that touches and affects the African soul – politics, social issues, and love. The media often portrays Africans as an unloving people, pure because they define love from a western perspective.”

“Universal topics, love, romance, life challenges, and being an African, I also home in on the effects of slavery, colonialism, tribalism and apartheid. We no longer love ourselves and our ways because of systematic brainwashing!”

“Piece of the past, highlights the need for Africans to rediscover themselves and rebuild the family unit. I often say, poets take credit for the work of angels. The best poems won’t let you sleep, the words will wake you if you’re asleep, stop you from sleeping if awake, stop you from doing something else until the poem has form. My poems write themselves from my experiences first hand and second hand interactions.”

All the poems are inspired by Africa, half deal with the spirit, a quarter celebrates love in its various guises, and the another quarter focuses on Africa and the plight of her descendants wherever they may reside.

“Different strokes for different folks, I prefer to focus on the words, the words are meant to move you and not the costume or stage devices. History is written by the victor.”

“Poetry offers a balanced narrative of events. I would agree that the poet, more spiritually equipped to portray the truth, pity poets don’t have the resources given to historians. For example, a historian will toe the party line when dealing with ethnic violence, whereas the poet will focus on the loss of human life. The historian is only accountable to the government of the day; the poet is answerable to the ancestors and has to be accountable for an eternity.”

Some of his unpublished work is available on his blog Nativedrum. You can interact with him on various social media platforms, including Facebook and Google+.