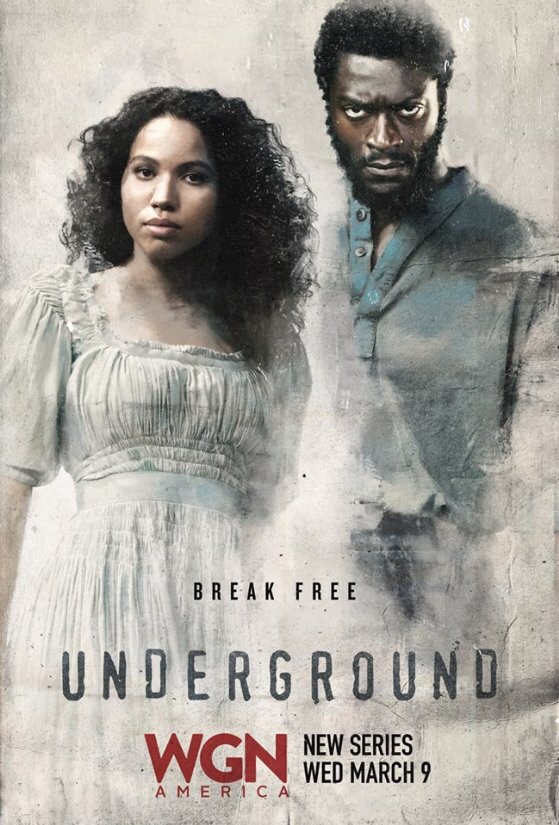 In the wake of WGN’s newest hit show ‘Underground’, which premiered last month starring Jurnee Smollett Bell and Aldis Hodge and follows a group of slaves attempting to escape a Georgia plantation through the Underground Railroad, I want to remind the nay sayers of the value these stories still have all these years later. Just because the ignorant choose to believe Black history started with slavery does not mean we cannot honor our foremothers and fathers by keeping their struggle alive through various art forms and reminding ourselves the stock from which we come. From soul food to head wraps the very fiber of our being, just like this country’s, was built on the backs of slaves and there is no shame in that. We should embrace our ‘slave stories’.

Here are 10 reasons I will never get tired of well crafted books, movies and television shows where the plot includes slavery.

Some Black folks get wind of a movie about slavery coming out and immediately get upset. “Damn! Another slave movie!” And I get why. Slavery is not the beginning of the history of the African Diaspora nor is it the pinnacle of our existence in North America. Why can’t movies be made about our Kings and Queens? Why hasn’t a movie about Black Wall Street or The Move Organization been made? I agree with that sentiment. I do wish a wider range of our stories made it to the silver screen. HOWEVER- because I am a seeker of knowledge and information I don’t REQUIRE others to show me my people in a positive light and I don’t EXPECT them to. I do that for myself. And WE must do that for OURSELVES. For those who haven’t noticed, our images in the media will never be what we want them to be unless we are controlling them. And when we cannot control what someone else is passing off as ‘Blackness” we must provide the world with alternative interpretations of our multidimensional selves.

How could I ever be upset about present day proof of the barbarism and hypocrisy of this country and where it all started? We still have men shooting down men, women and children in cold blood simply for being Brown skinned and getting away with murder because the system is rooted in the very thinking that made slavery acceptable for centuries. How could I not be a fan of knowing the truth? Plus it’s nice to be reminded how far we’ve come, but more crucially, how far we still need to go in order to achieve a truly equitable and accessible society.

I think part of the aversion Black people have to movies about slavery is an association with slaves because they are Black. They don’t want to think of themselves in that situation and they don’t want to witness their people being subjugated. That is understandable. But what we have to understand about slaves is that they were people first. They belonged to their mothers, wives, tribes, and children long before outsiders deemed them property. It is just a word and no slave was ever “just a slave.” They were people like you and I and I am not ashamed of my ancestors. If anyone should feel shame it is the descendants of the slave holders, NOT the descendants of the slaves.

7. OUR PRESENT IS DIRECTLY EFFECTED BY OUR PAST

When you look at a slave movie, and you watch the interactions between slave master and slave, between the slaves from different African countries, between the dark skinned and bi-racial children born into slavery and treated differently because of their hair texture and complexion, you understand the root of a multitude of modern day ills effecting the Black community. There are many different types of slavery. Think of the woman with locs who had to cut them to keep her job because someone somewhere with bone straight hair decided dreads are “unprofessional” and it became unwritten law. Think of the youth killing each other in the streets because they can’t see eye to eye simply because they live in different housing developments. Think of how many times on social media you see the phrase team light skin or team dark skin. These are all modern day manifestations of century old foolishness meant to keep us separated from each other while trying to assimilate into a culture that wants nothing to do with our authentic selves.

Did you hear about the board of education in Texas changing the name of slavery to ‘the transatlantic triangular trade’ in its text books in the first of many steps toward erasing US slave trade from the history books altogether? Cause it happened in 2012. And its happening all over America. In addition to white-washing our characters in film, excluding us all but completely in history, misrepresenting and/or continually trying to discredit our leaders in the public sphere and picking and choosing whom to celebrate based on who posed the slightest threat to the status quo, they are straight up trying to erase slavery from the collective conscious of America.

5. I WILL NEVER FORGET AND YOU SHOULDN’T EITHER

The erasure of slavery from American history would not only be an insult to the memory of the millions of slaves who were bought, sold, starved, raped, beaten and dehumanized before our time, but it would also make the current situation of Blacks in America a mystery. If you understand that Africans were deemed only 3/5 of a human being at the very same time the U.S of A was fighting for freedom and autonomy from Great Britain than you can comprehend why the Trayvons, Jordans, and Rekias of the present day cannot receive justice.

4. NO FORM OF SLAVERY WAS AS BARBARIC AS THE TRANSATLANTIC SLAVE TRADE

When discussing the brutality of the TransAtlantic slave trade people often argue that slavery was everywhere, since the beginning of time, and that some Africans sold their own people into slavery. Since this is true, some believe what happened to the Africans traveling through the middle passage and arriving in the colonies can be lumped into all the other forms of slavery throughout history. That is a cop out and an insult, not only to the memory of the human beings who lived through slavery, but also to those after them who lived through the Jim Crow era, lynch mobs, the KKK, and those after them who were beaten, jailed, attacked by dogs and sprayed with high power water hoses during the Civil Rights era not even 50 years ago. If you take a good hard look at not just slavery, but its short and long term ramifications, there is no way a comparison to anything else could be legit.

Film and literature enable us to travel to places and times we may never get to actually experience. In the case of films about slavery I think it’s important to relive that pain and anguish. Not to be overcome by it but to understand the greatness from which we come. We survived this. The strength, determination and resilience of our people is showcased by the simple fact that we are still here. After centuries of subjugation we are still fighting to be seen as human beings by some members of society, and yet we live as students, artists, doctors, lawyers, entertainers, educators, politicians, engineers, authors, athletes, and the list goes on. Knowing our history helps many of us strive for excellence in the present as a way to pay homage to those before us.

If you ask someone under the age of 15 whether or not they have seen ‘Roots’ the answer will most likely be no, but if you ask them whether or not they’ve seen ’12 Years a Slave’ you might be surprised how many of them would be able to discuss it with you. It’s very important for young people to stay current and they often shy away from anything deemed ‘old (with the exception of vintage/thrift clothing which is now trendy.) Contemporary films about slavery keep dialogue on the subject open and give young people the option of simply watching a movie to learn more about the time period.

Black people are often made to feel as though they are wrong, rude, sensitive or delusional when they take a stance on racial issues. Some have opted out of having an opinion altogether and simply keep quiet in the wake of blatant racism or they will purposely take a self destructive stance so they don’t seem ‘butthurt.’ I think that kind of thinking has a lot to do with the sharp rise in numbers of people who are all of a sudden tired of slave movies and being very vocal about it. Part of my pride in being who I am comes from knowing where I’ve been and how people like me have persevered so I don’t mind being reminded of one particular part of our long, glorious and GLOBAL history of ingenuity, courage and uniqueness.