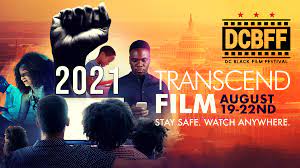 If you love films that are compelling, artistic, entertaining, and, most of all, made by Black people, the DC Black Film Festival (DCBFF) should definitely be on your radar. The DCBFF presented its fifth year virtually this year due to COVID and, just like years past, it showcased a lot of great films and amazing talent. I even had the opportunity to do one this year.

The brainchild and curator of the DCBFF, Kevin Sampson, has been optimistic since the change from in-person to virtual screenings stating, “The pandemic has kept us at bay as an online festival during the past couple of years. So I think we should be bigger than we are, but the festival’s reputation has grown nicely since its inception. I’m grateful that we’ve been able to provide filmmakers with a 5-star festival even while adapting. Without filmmakers, we don’t have a fest, so what they think matters a lot to me.”

“I will be bold enough to say, I have gotten so many wonderful film roles, but I’ve gotten even more film roles where I haven’t been the show. It’s like I’ve been invited to a really fabulous party, only to hold up the wall. I wanted to be the show. I wanted to have a character that kind of took me out of my comfort zone, and that character happened to be in a Shonda Rhimes show. So I did the only smart thing any sensible actress would do—I took it.” —Viola Davis

There are some past DC Black Film Festival participants that have made the move in some mainstream projects like Kyra Jones and Angel Hobbs. “I’m like a proud dad any time I see artists go on to do big things! Not that I have anything to do with their success, but I’m rooting for them. The reason I started the festival was that I heard from so many indie filmmakers who said they have stories but no outlet to exhibit them. So being able to see them come through the festival and continue on to bigger opportunities is awesome! Any time a film gets into the festival it’s hard-earned.” Sampson said with delight.

Sampson said some of the best moments for this year’s festival were the social events and programming. He further explained the filmmakers were able to get together multiple times virtually and connect. Sampson continued with, “That spark of collaboration and networking is important to a festival and I’m glad we were able to cultivate that. We had a lot of heavy hitter professionals in the industry that joined us and I was grateful for the time and knowledge they dispersed to everyone!”

Sampson’s goal for next year’s festival is to be in person again. He explained “I believe having an online element will be a part of the festival but I can’t wait to be back in person. So that’s the number one goal, but it’s not up to me if that happens. (laughs) From there, I’d like to continue to have great special guests. We’ll see what the future holds, but I know we’ll continue to bring the quality festival people have come to love.” Sampson also hopes to screen a major film next year, that is the one goal he hasn’t achieved. He still loves showing independent projects, which is the reason the DCBFF was created in the first place.

With the popularity of streaming services growing due to the influx of COVID cases, that lends more opportunities for more diversity and inclusion right? Well, the entertainment business has some ways to go but with film festivals like DCBFF, new stories by Black creatives are given a platform. DCBFF is definitely worth checking out every year and you are also supporting the Black artists. For updates on the DC Black Film Festival go to DCBFF.org.

“Eavesdropping on the Elders” by Kiah Clingman, Robinson Vil – A story influenced by Kiah and her father, Jim Clingman. The story is about a young woman that must take care of her father struggling with ALS (Amyotrophic Lateral Sclerosis) and finds herself getting assistance from her elders with help of magical glasses. The elders consist of Historical Black figures Frederick Douglas, Marcus Garvey, Harriet Tubman, and more. The film was touching and provided some information about life with ALS.

“We Deserve Better” by Keya Rice, Mariam Khan – What were some tenants going through during the pandemic? With cities shut down, workers were laid off, many property owners were evicting tenants or allowing them to live in terrible conditions. Keya gives the audience a look from her perspective as a tenant in a New York apartment complex. With conditions poor and tenants battling COVID, this story had me feeling sorry for Keya and the other tenants. I commend Keya for being brave enough to tell this story.

“Blue Cave” (Best Student Film Winner) by Muhammad Bilal – A story about a young Black man who escapes the harsh reality of the environment and his verbally abusive father, through his writing. This film is a coming-of-age story and a story about overcoming toxic masculinity. The personal project by Bilal is well told and would recommend people watch it.

“Check Out Time” by Calvin Walker– When two friends settle into a creepy hotel, their relationship encounters not only hidden feelings toward one another but a bitter hotel owner. This film was definitely a tale from the Darkside, pun intended. It made me think about just checking into hotels like the Hilton.

“TNC” by Bobby Huntly (Best Director Winner) – A film that combines Tales From the Crypt with Tales From the Hood but with cool 80’s effects. Bobby Huntly does a good job visually with the fluorescent blue and red hues in the bar. A story about a young Black Man in a bar with other Black strangers, who have a common reason for being at the bar. The twist is both surprising and reflective.